The Manor House at Knorhoek

Trust no-one. Everyone is a suspect. Including you!

Guests are immersed in a murder investigation over a mouth-watering meal, where they are both defendant and detective. Each guest must help us crack the case in order to absolve themselves. There is a total of 8 suspects at each table, one of whom is you!

All guests are given a character brief including their background, relationship to the victim and alibi three days prior to the event. They are encouraged to arrive in character, ready to crack the case. Upon your arrival you will receive a welcome drink and will be shown to your table, where you can brush up on your backstory before we get started. Once you are settled in you will be given a chance to browse our selection of props and costume pieces and get into character.

As soon as everyone is seated, your food order will be taken, and we will begin the mystery… Two actors in role will lead the investigation, providing extra clues throughout the event. There will be three clues at your table setting which you are welcome to trade with your fellow suspects at any time during the investigation. It is in your best interest to form alliances and obtain as many clues as you can get your hands on! Throughout the event you will interrogate the other suspects at your table to gain as much information as possible. All suspects must answer truthfully according to their scripts. The lies are built into the script so even the murderer doesn’t know whodunit!

Prizes are awarded to the best character, best dressed and the first super sleuths to crack the case!

Hawaiian Homicide
Winnie Waheli was the head judge at the annual hula contest on Kikiwai Beach. Once regarded as the most accomplished dancer in all of Hawaii, Winnie’s career ended abruptly twenty years ago when one of her more strenuous moves produced a recurring medical problem which prevented her from ever competing again. She was then hired by the Kikiwai hotel to organise and run the hula event. Tonight would have been the night that Winnie and the hula event would make headlines again. However, someone must have taken exception to Winnie’s overbearing antics. This morning her lifeless body was found on the very beach where she had achieved fame and fortune.

YOU have been named as a suspect in this investigation, so get into character and join CSI detectives Lee Justice and Lauren Law at the Pineapple Ballroom to clear your name and find out whodunit!

I do a lot of stuff. Like, A LOT. All the time. So sometimes it’s a little difficult for me to be impressed. Which is terrible, I know, and I feel like a dork even saying it. But it’s true. The good thing, though, is that if something genuinely fantastic comes along, I’ll be over the moon. And that’s exactly the experience I had with the Dinners To Die For experience at Bu Ya Ramen & Sake Bar this past weekend.


Looking for a bloody good night out in Cape Town full of mystery, suspense and excitement? 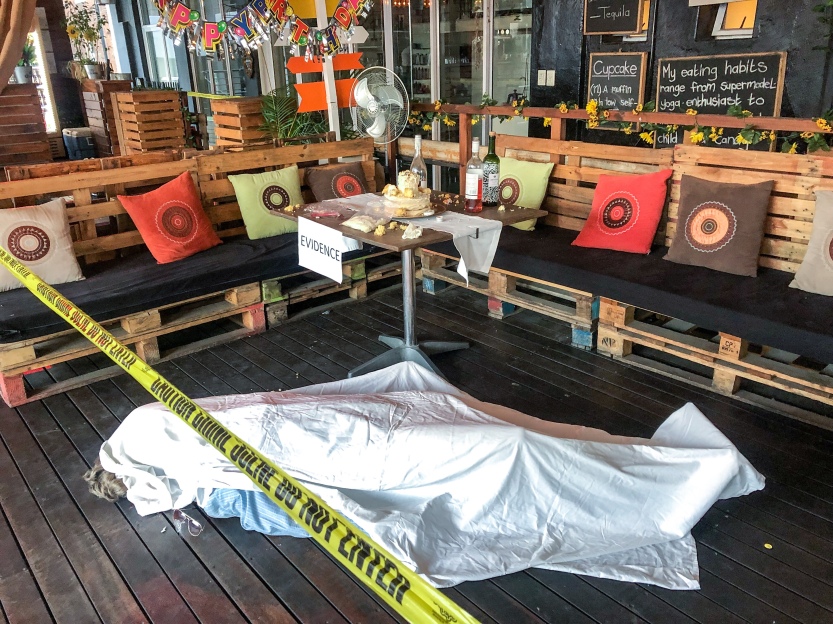 
"Just got home from tonight's murder mystery dinner and all I can say is wow! Awesome hosts, perfect venue, excellent co-sleuths at the table and overall just a wonderful experience! Thanks for a memorable evening!"

Other events by Dinners To Die For

The Manor House at Knorhoek